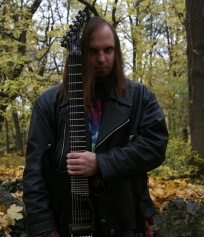 Akos Olt, lead guitarist of Kill With Hate, was born on the 9th of March 1987 in Budapest, Hungary. Early on he was a fan of guitar music and fascinated by the art of the instrument. He was a fan of classic rock bands like Deep Purple and Led Zeppelin as kid, but in his early teens his life was completely changed by the genre: metal. That inspired him to pick up the guitar. Started out on calssical guitar in 2000 but the real passion was with his first electric guitar in 2003.After the first attempts with being in a band, he joined the thrash metal act Archaic in 2006. They’ve gigged a lot, even toured with Testament, but Akos was more into death metal than thrash, so he quit to focus on his current band, Kill With Hate.He recorded an EP and an album with Kill With Hate, Evolution of the Beast in 2009 and Voices of Obliteration in 2012, did 3 european tours, and opened the stage for bands such as Cannibal Corpse, Origin, and The Black Dahlia Murder.
His main influences are Jon Levasseur from Cryptopsy, Paul Ryan from Origin, Muhammed Suigmez from Necrophagist, Chuck Shculdiner from Death and James Murphy to name a few.