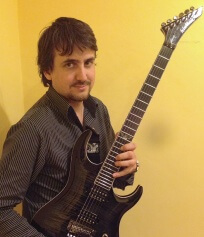 Andrea Quartarone lives in Siracusa (Sicily). He’s actually one of the most important modern guitar players in Italy and Europe. His musical career started at the age of 13.

In August 1995, during an international competition for electric guitarists in Losanna, (Switzerland) Andrea was awarded as “best young European talent”.

He participated at the International Convention A.D.G.P.A. held in Soave (VR- Italy), during 1998 and 1999, together with famous artists such as John Stowell, Albert Lee and Mick Abrahams (Jethro Tull), Tommy Emmanuel, James Burton and Jerry Donahue.

From 2001 he collaborates with AXE Magazine: he’s columnist with his own guitar section on “GUITAR PERFORMANCE” (before) and “CREATIVE GUITAR”.
In January 2006 he taught two clinics in two of the most significant music schools in the world: GIT (Guitar Institute of Technology) and USC (University of Southern California) both in Los Angeles (USA).

In October 2008) has been invited to hold two Master-Classes and a recital in WASHINGTON UNIVERSITY (St.Louis-Missouri -USA). Also he’ve recorded in New York (USA) , at the same period of time, a new cd (contemporary jazz) “Heard Instict” with Bruce Arnold.

During the 2009 he’s invited to play at NAMM Show (Los Angeles – USA) and Musik Messe (Frankfurt – GERMANY), both for RANDALL and WASHBURN brands. During the Musik Messe days, he’s honoured to be the only Italian musician invited to play at Agora Stage, together: Chad Wakerman, Paul Gilbert, S. Lukather, M. Angelo, Rage and others. In the same year, he’s invited from USC (University of Southern California) for a second time and LAMA Music Academy, both sited in Los Angeles (USA).

At the end of May 2010 has been invited to play in Seoul (SOUTH KOREA) and Tokyo (JAPAN), in occasion of showcases about his music and guitar style and he plays in the most famous music festival in Seoul, named BUNGALOW MUSIC FEST. He plays like special european guest.