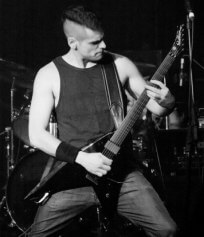 Rafael Augusto Lopes (born May 10, 1984) is a brazillian guitarist and musical producer. He is a touring musician since his first band when he was 14 years old. From Punk Rock to Black Metal, Augusto’s played and recorded with a few bands, including Torture Squad’s Aequilibrium via Wacken Records and Fanttasma’s Another Sleepless Night, critically-acclaimed in Brazil.

Having worked in studio with a long list of brazilian bands including Kiko Loureiro, Dr. Sin, Hangar, Lobotomia, Imminent Attack, Lothloryen and many others, Augusto has dedicated his life to the path of music, specially extreme genres in general.