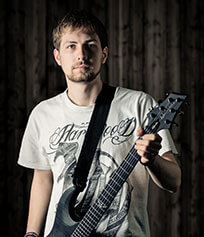 Chris Schmid is a German guitarist, producer and audio engineer. He was born in 1988 in Bavaria and has been playing the guitar for over 10 years now. His band Amplified Hate was founded in 2007 and played many gigs in 4 different countries. They shared the stage with all the big names in the hardcore genre. The band recorded three full length albums so far and the fourth album is in the making.

His studio has very humble roots. It evolved from a little corner in a rehearsal room to a very modern and sophisticated workplace. For his current studio (S&C Recording Studio) the interior of an old farm house was completely gutted and rebuilt in 2011. Chris loves a challenge and is open for many different genres, but the bulk of his work consist of metal, hardcore and punk music.