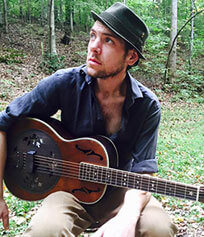 Gutbucket blues. Gypsy jazz. Back porch rock & roll. Cody Brooks plays it all, whipping up a raw, rootsy racket with a voice that’s as wild and roughhewn as the Tennessee backwoods.

The music all started 20 minutes outside of Nashville, where Brooks’ childhood home was filled with the sounds of the nearby Marrowbone Creek and his parents’ 78 rpm record collection. He listened to it all: Tommy Dorsey, Robert Johnson, Hank Snow, Son House, Jimmy Hendrix. Brooks picked up the guitar as a teenager and began traveling, too, spending time in Oregon and the southwest before Nashville’s music scene lured him back home. There, before he could legally drink, he started playing gigs at the blues bars downtown, tossing in his own songs between covers by R&B singers and Delta legends.

It was during one of those bar gigs that Brooks met Ken Coomer, an A-list session drummer and producer who’d cut his teeth keeping time for Uncle Tupelo and Wilco. Halfway through the set, Brooks asked the audience if anyone wanted to hop behind the drum kit. Coomer volunteered, kicking off a friendship that continued for years, eventually taking the two from the stage to the studio.

The result of those studio sessions is Handshake, Brooks’ debut EP. Filled with overdriven slide guitar and industrialized drumbeats, it’s a record that tips its hat to the past while still looking forward. Brooks’ songs spin stories of revenge, anger, dirty love, clean breaks and the infamous time that a baby copperhead snake bit him on the arm, resulting in a three-day fever dream (and inspired songwriting session) while he lay in bed and sweated out the poison. Although still in his 20s, Brooks has lived the sort of life that’s more typical of someone from the previous century — a life of restlessness, of travel, of baths in creek water and makeshift beds in barns — and Handshake embraces that old-world vibe, updating its sound with the sneer of punk rock and the swagger of hip-hop. It’s music for Saturday night sinners, delivered with the sort of fire-and-brimstone fury that’ll attract a few Sunday morning holy rollers, too.

“We wanted this record to shake the jaded,” says Brooks, who — along with Coomer — plays nearly every instrument on Handshake. “We didn’t want to sound safe. We’d run a cheap blues guitar through a hot amp to get an overblown sound, and we’d shake Ken’s entire trunk of percussion instruments to make this incredibly aggressive, trashy drum sound. We were embracing the songs, and we were embracing noise, too.”

In parts of the Bible Belt, most friendships still start off with a handshake. This is Brooks’ handshake, his grand introduction to the public. He’s happy to meet you. You’ll be seeing more of him soon.