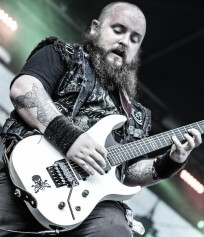 Avast, ye landlubbers! From the deepest darkest depths of eastern Scotland comes ALESTORM, a drunken band of pirates on an epic quest to drink your beer, steal your rum, and be the greatest damn band that ever did sail the seven seas!

Describing their style as “True Scottish Pirate Metal”, Alestorm plays an infectious blend of modern folk and power metal with a unique piratical twist. After forming in 2006 and rapidly gaining a cult following in their local scene, the band signed to Austria’s Napalm Records, and released three groundbreaking albums; “Captain Morgan’s Revenge” (2008), “Black Sails at Midnight” (2009), and “Back Through Time” (2011).

Now in 2014, hot on the heels of their recent live album “Live at the End of the World”, Alestorm are releasing their 4th full length album, entitled “Sunset on the Golden Age”. Prepare to have your mind blown with some of the catchiest Pirate Metal anthems you’ve ever heard, with tales of mythological creatures, epic battles, and swashbuckling action that’ll make you want to raise up a pint of rum and sing your heart out.

Alestorm are coming to kick ass and chew gum. And they’re all out of gum.