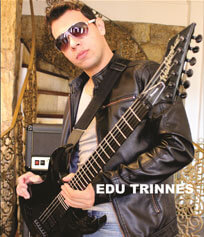 Edime Trinnes is a guitarist based in the Sao Paulo state of Brazil, who works as a session guitarist, as a guitar teacher, and plays in a band with his brothers and parents, named Trinnes. The band includes his brothers Junior (bass/vocals), Tales (drums), Igor (trumpet), along with his mother Teresa (keyboards), and his father Joao Carlos (sax). Edime, who has played the guitar since the age of 5, gets his nickname from Dimebag Darrel, his favorite and most influential guitar hero. Trinnes has made television appearances on Channel Rede Globo, Rede TV, and others in Brazil. In addition to teaching guitar, Edime conducts workshops and clinics around Brazil for Washburn Guitars and Marshall Amplifiers, as well as demonstrating product at Brazil’s Expo Music in the fall.

Edime has studied music at IGT, Souza Lima, as well as Professor of Music Unicamp. He has played with some of Brazil’s best guitarists, to include Kiko Loureiro, Edu Ardanuy, and Pepeu Gomes. In addition, Edime has opened for many major Brazilian bands, including Charlie Brown Junior, Detonaltas and Capital Inicial.