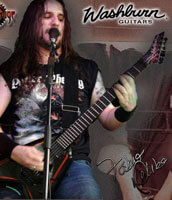 Machinage was formed in Jundiaí, SP – Brazil in 2007 with Fábio Delibo (guitar and vocals) and Fernando Kump (guitar), since the beginning, with the proposal to play their own songs and soon join the band Vinícius Zanotello (bass) and Marcio Cardoso (drums).

After almost one year, Vinícius Zanotelo decides to leave the band and Alexandre Momentel (bass) takes his place. With this line up comes the first opportunity to share the stage with the great Swedish band “Dismember”.

In 2009 Marcio Cardoso leaves the band and Raul Pauleto (drums) joins them when the band consolidates their name in the scenario sharing the stage with great famous bands like: Sepultura, Angra, Almah, Torture Squad, Tim Ripper Owens (ex Judas Priest) among others.

In 2010 another change in the line up, Ricardo Mingote gets the drums and some after Alexandre Momentel and Fernando Kump announce their leave but saying goodbye with a great performance sharing the stage the famous American band “Overkill” confirming the band’s great work.

In the end of 2010 the band gets the endorsement from two of the most famous brand names in the world, WASHBURN and RANDALL to consolidate them as a great promise in the music scenario.

Today Machinage is Fábio Delibo (guitar and vocals), Renato Lorenccini (guitar and back-vocals), Adriano Bauer (bass) and Ricardo MIngote (drums), and they are recording their debut album “It Make Us Hate” that is being produced by Tim Laud (Soulfly and Cavalera Conspiracy) which will be released in the beginning of 2011.