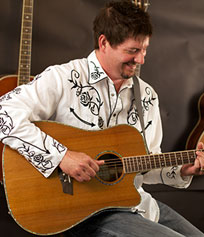 Forrest Lee Jr is a Singer, Songwriter, multi instrumentalist in Nashville TN.
He is primarily know as an ace guitar player.
He was born Forrest Lee Bibbee Jr, in San Gabriel CA on Jan 6, 1970.
The son of country music legend Forrest Lee Sr, Forrest started playing live music by age 7. He received his first guitar for Christmas when he was just 2 years old.
For many years he played lead guitar, and sang harmony in his father’s band, Forrest Lee and the Shenandoans.

In 1985 Forrest formed a grunge metal band called Equinox, and released a cassette tape to friends in his high school. It was later in 1985 that Forrest moved to Texas and started playing country music with his father around the Dallas – Ft Worth area, mostly in Arlington TX.

Forrest moved to Bellingham, WA in 1986, and reformed Equinox, which continued to play Metal, Grunge, and classic rock. The band recorded off and on for 5 more years.

By 1987 Forrest Lee Jr was playing 7 nights a week at The Palms in Birch Bay Wa. Monday – Thursday Forrest fronted a trio (Big Whiskey), with Ray Neyens on Bass, and Greg Babcock on drums.
On weekend nights, his band would back Forrest Lee Sr. as the Shenendoans. Forrest also played lead guitar on weekend afternoons with the bands that played locally.
He continued to play 7 nights a week (and 2 days) for 3 years until 1989.

From 1989 to 1990 Forrest played with almost every band in the NW Washington State area. Playing lead guitar, and singing harmony.

Forrest joined Bobby Teesdale, to create the duo Bobby T and Forrest Lee. They toured Canada 1990-1991, playing 6 nights per week. They released a single to radio and had a European and Canadian hit with “Exception To The Rule”. Bobby T and Forrest Lee were voted Country Duo of the Year in Twang Magazine in 1991. After the duo joined Canadian super group Gerry King and Sudden Thunder for a short stint in 1992, they broke up and Forrest reformed the trio Big Whiskey, playing regionally in Washington State.

Big Whiskey released their Debut album “I Can’t Fall In Love” in 1994.

Forrest Lee Jr moved to Nashville in 1995, and by his third day in Music City, he was subbing for Redd Volkaert in the Don Kelly Band along with Jimmy Yeary (songwriter) on Vocals.

In 1998 Forrest joined a new band of songwriters, with James Otto as the primary singer.

Forrest moved to Seattle in 2000 and went to work for Microsoft off and on for the next 5 years. He built a recording studio in his house and started recording film and TV music, as well as four, self released solo albums. In 2001 he started recording the Useful Guitar Series of guitar instruction videos.
From 2001 – 2005 Forrest played in several bands in the Seattle area, as well as fronting his own band Forrest Lee Jr. and the Broadcasters. By 2005, Forrest was playing live more frequently, with Lee Anderson and 90 Proof, and Lucky Lawrence and the Souvenirs. Forrest Moved back to Nashville in 2006.

In 2011 Forrest co-wrote “Erin Tennessee” with Joe McShane and Daniel O’Donnell, which was recorded at the Ryman Auditorium in Nashville and released by Irish superstar Daniel O’Donnell.
Forrest was one of 5 finalists of the 2011 Guitar Player Magazine Guitar Superstar competition.

2012 Washburn released the Forrest Lee acoustic bender guitar, the first production acoustic guitar with a B bender installed. This marked the first full signature Forrest Lee Jr. guitar.
Forrest Is now touring internationally in support of his current album, the tribute to his father Forrest Lee Sr, as well as testing his new instrumental record on audiences, soon to be released in 2013.

Forrest has has songs in hundreds of Film and TV shows from “The Office” to “Friday Night Lights”. HBO’s Real Sex, Showtime’s “Weeds” , 2012 Lionsgate horror film “The Possesion”, Lifetime movie “Unanswered Prayers”. He wrote and produced most of the soundtrack to the film “Palo Pinto Gold” with Trent Willmon