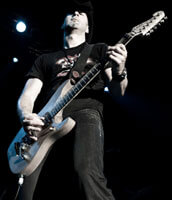 The end of this road back to life and the start of a new GOTTHARD era is evident for the Swiss multiplatinum band with “Firebirth”, the new and moving album. It is the first studio album since the tragic death of the legendary frontman Steve Lee in a traffic accident in the autumn of 2010 and the first step in a new and much anticipated chapter for the band, together with their new singer Nic Maeder.

In November 2011 Nic, born in Switzerland, who spent many years in Australia, accepted one of the most difficult and also one of the most exciting and emotional tasks in his life.

Without a doubt, the first album together, “Firebirth”, will be a tribute to rock and roll as an experience of life. Strong, earthy, real!

Together with the producers, Leo Leoni and Paul Lani – an American who had already worked very successfully with the band on the albums “G” and “Homerun” and who knows exactly what the Hard Rockers are about – GOTTHARD has produced in their own Yellow House studio in Lugano, Switzerland, a real jewel.

“Firebirth” shows clearly the essence of the rocker soul and you sense that it is completely honest. The obvious enjoyment of the band in playing cannot be ignored and this gives the new songs an unmistakeable character. It is a rebirth of the zest for action with which they started twenty years ago to conquer the world.

With around 3 million records sold, the exceptional band has set high standards in the past years. Every one of their 13 albums held the pole position in the Swiss charts.

After the release of the album in June, they will start their world tour in South America and will prove their reputation as an excellent live band in the summer in all the important European festivals.

Appearances like Bang Your Head in Germany, Sweden Rock, Graspop in Belgium, Gods of Metal in Italy or Masters of Rock in the Czech Republic are only some of the highlights, until late summer, when the band will give concerts in Asia and then in autumn a drawn-out Headliner hall tour throughout Europe.

“Firebirth” will be released June 1st by Musikvertrieb (Switzerland) and Nuclear Blast/Warner Music (worldwide) and will write a new important chapter in the sensational career of the popular band, who had the strength and courage to withstand such an unbelievable tragedy, to keep looking forward and thereby to produce such real and honest music, and to let “Firebirth” come alive for them and the world.