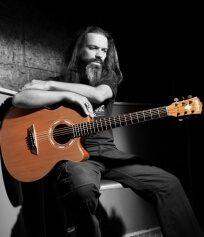 George Bokos is a Greek guitar player, composer, producer and engineer with 15 years of experience in the Metal/Rock music business. As a guitar player he was introduced to a greater audience in 2001 with his work with NIGHTFALL by releasing two studio albums with them. In 2005 he moves to legendary Greek band ROTTING CHRIST, with whom George became an active touring musician and performed in more than 500 shows around the globe till 2012 . During the”Rotting Christ Era”George performed all over the biggest European Festivals (Wacken Open Air , Graspop Metal Meeting , Summer Breeze and many more) , toured and shared the same Stage with Bands such as MALEVOLENT CREATION , IMMOLATION ,VADER , MELECHESH , HATE ,MYSTIC CIRCLE and many more. Ιn 2010 and in between touring , George recorded the first demo of STONE COLD DEAD as a way to express his own musical direction. Contrabass player Charis Pazaroulas (ex-OSTROBOTHNIAN CHAMBER ORCHESTRA) very soon joined forces and sharing the same vision with George . A unique element of Stone Cold Dead debut album is that three extraordinary drummers became part of the recording line-up, each in a different triad . George Kollias (NILE),Yannis Stavropoulos (NUKeLEUS) and Dimitrios Dorian-Vorskaath (ZEMIAL) gave their own special mark on STONE COLD DEAD is debut album entitled “Lava Flows”. STONE COLD DEAD’s distinctive sound is an amalgamation of extreme groove metal with rock and blues influences using some unique sonic elements such as bowed contrabass along with baritone guitars and 5-string bass. The vocal style ranges from melodic death growls to clean vocals -which were handled also by George -, balanced to achieve an aggressive yet melodic effect. “Lava Flows” is produced and engineered by George Bokos and will be released later this Year. As a Producer and Engineer George has more than 50 albums in his portfolio . Over the last years he has collaborated with Artists & Bands such as MELECHESH ,GEORGE KOLLIAS UNEARTHLY,WOLFHEART and many more from all over the globe, in terms of engineering , production or pre-production , mixing & mastering. George is well know for his dedication in producing and engineering over the years . Washburn’s acoustic comfort series is his go to when it comes for recording acoustic parts and it sounds fantastic!