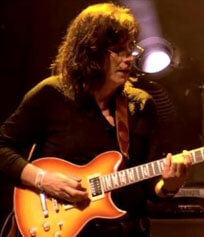 He is a founder of Cristal y Acero rock group (1980-1989) (the band was granted the “Manuel M. Ponce” award for best original music for theater, given by the Union of Writers and Critics of Theatre in México City, for the music score of Kuman rock- opera which counted more than 1000 performances. The band was portrayed as the “Best Spanish Act” on the Metal Forces Magazine (UK 1985).

In 2003 Icar goes on a clinics-tour with super-guitarist Michael Angelo Batio in the main cities across México. He is currently an endorsee and clinician for WASHBURN guitars, BLACKSTAR amps, HIWATT amps, and D’ADDARIO strings and teaches music in clinics, seminars and private lessons. Writer for Musico Pro, Sound:Check, EQ en Español Magazines, reviewing music gear.