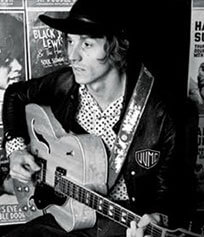 Jake Sinclair is a GRAMMY-nominated producer and musician who has worked with a wide variety of internationally acclaimed best-selling artists including Taylor Swift, 5 Seconds of Summer, Fall Out Boy, P!nk and many others. Originally from Boise, ID, the LA-based Sinclair started playing music at 7 years old and formed his first band at the tender age of 11. “I’d convince two kids to get their parents to buy them instruments, we’d form a band where I’d write all the lyrics and parts – basically micromanage it into the ground. Later I figured out there was a name for that: producer,” he laughs. At 18, Sinclair moved to Charleston, SC and started the band The Films with some high school buddies, relocated to NYC. It was through The Films and their major label deal that Sinclair ended up meeting friend and mentor Butch Walker, who produced The Films’ second album. Sinclair and Walker bonded while working together and when The Films split up, Walker suggested Jake move to LA. For years Sinclair had been hard at work producing smaller bands on his own & Walker pointed out that a change in local would offer the hard-working producer ample opportunity. Once in Los Angeles, Sinclair further honed his skills working with multi-platinum artists like Weezer, Taylor Swift and Train. After spending 5 years under Walker’s tutelage, Jake recently moved to his own studio at Infrasonic, in Echo Park. When he’s not putting the finishing touches on international pop hits (“She Looks So Perfect,” “Harlem”), you might find Sinclair writing depressing Hawaiian breakup songs for his pet project, Alohaha.