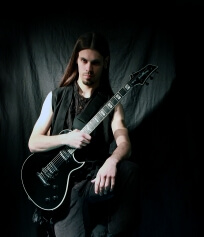 I started playing the guitar at the age of ten in 1999 on my grandma’s old classical guitar. Because of my upcoming love to rock and metal music I changed to electric guitar in the same year. I took lessons by different teachers in my hometown Hamburg (GER) through the years. After a while I discovered my ability for singing and developed my skills to write songs with the clear direction to pay my rent as a musician. Soon I started to give guitar lessons and founded my first bands.

In 2004 my main band Vogelfrey was born and the first gig followed in 2006 after a long time of changing members, songwriting and defining our folk metal style. Since then we toured all over Germany folkrocking clubs and festivals like Wacken Open Air (2012, 2014), Rockharz (2011, 2014) or Summer Breeze (2011).

My conclusion as a state-approved Professional Musician in the field of popular music (rock, pop, jazz) in 2011 at Hamburg School Of Music (main subject electric guitar) built the fundament for earning my living with music which I do since then. Tutors like Marcus Deml, Sandra Hempl, Bernard Fichtner or Matthias Pogoda helped me to develop my identity as a guitar player and musician.

To date I released two studio albums with Vogelfrey as vocalist, guitar- and bouzouki player („Wiegenfest“ (2010, SMP Records) and „Zwölf Schritte zum Strick“ (2012, SMP Records)) At the moment we’re working on our third creation to release it in 2015.

So horns up and keep rocking the folk!