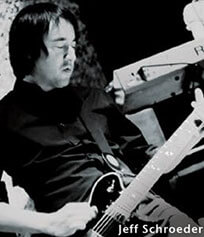 Jeffrey Kim Schroeder is an American rock musician, who became a guitarist with the alternative rock band The Smashing Pumpkins (replacing co founder James Iha) in 2007. He is currently finishing his PhD in Comparative Literature at UCLA, where he specializes in Asian American Literature, Francophone Literature, and Critical Theory.

On April 6, 2007, rock rumor webzine Buddyhead reported that Schroeder was the new guitarist for The Smashing Pumpkins, replacing James Iha in the new line-up. Schroeder toured with the band throughout 2007 and 2008 and appeared in the music videos for “Tarantula”, “That’s the Way (My Love Is)” and “G.L.O.W.” In June 2010, Schroeder appeared in a live Internet stream playing on a demo with the band’s current lineup.

Following the departure of Ginger Pooley in 2010 to raise her new newborn daughter, Schroeder remained the only member of the band besides Corgan still present from the 2007 revival show in Paris.[1] On April 17, 2010 Schroeder played the first show with the newest lineup of Smashing Pumpkins which included Jimmy Chamberlin’s replacement Mike Byrne on drums and The Electric Prunes bassist Mark Tulin.