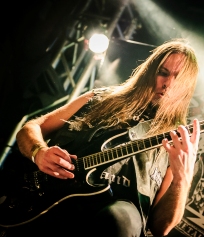 Sister Sin was formed in 2002 and released various recordings via smaller indie labels. They issued their first non-indie album Switchblade Serenades via Victory Records in October 2008; it reached number 107 on Top Heatseekers in the first week of release in the US. The band performed two US national tours in support of the album, with bands like Motörhead, Otep, and Ill Niño. Sister Sin also toured Europe with Arch Enemy and played at festivals like Sweden Rock and Norway Rock. In early 2010 they recorded a follow-up album entitled True Sound Of The Underground with producer Henrik Edenhed (of Dead by April, Lambretta etc.) which landed on number 96 at Top Heatseekers in the United States on June 22nd 2010.

Later that year the band parted ways with bassist Benton Wiberg, due to his inability to tour. The band recruited Strandh as a new bassist and toured Europe with Lordi. Two US tours followed, first with Straight Line Stitch, System Divide and In This Moment, then with Blackguard, Destrophy and Otep.