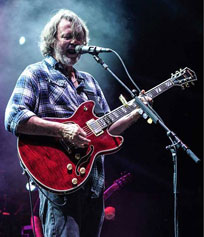 27 years ago this week, a singer everyone called J.B., a bass-playing future journalism school dropout and a guitarist nicknamed Panic for his bouts with anxiety went looking for a drummer for their next gig.

After striking out with the usual suspects around Athens, Georgia, the three friends made an eleventh-hour call to a high-school band mate of the guitar player living in Atlanta, thinking he might still have his kit handy.

A few days later, Todd Nance rolled up to the house at 320 King Avenue shared by John Bell, Michael Houser and David Schools in an old, beat-up white Maverick, his drums crammed into the back. After a night of rehearsing, the new quartet hopped onstage together for the first time the next day at the old Mad Hatter Ballroom to play a short set that opened with the Buffalo Springfield classic “For What It’s Worth.” Widespread Panic was born.

Within the year, Domingo “Sunny” Ortiz, a drummer new in town from Austin, Texas, began turning up at their regular Monday night gigs at the Uptown Lounge and never left. As weekly gigs morphed into regional tours, the band began to forge a sound unto themselves, a combination of Houser’s unorthodox guitar playing, Bell’s coarse growl, Nance’s rock-steady drumming, Schools’ lead bass playing, Ortiz’s multi-textured percussion coupled with a collective commitment to playing original songs from the outset and a willingness to walk the improvisational high wire night after night.

Landslide Records came calling and Space Wrangler, Widespread Panic’s debut album, dropped in September 1988, the first copies of which were hand-delivered to the band by Col. Bruce Hampton, an area shaman, bandleader and early mentor. Former Dixie Dreg T Lavitz manned the keyboards for the band’s self-titled follow-up released on Capricorn Records in July 1991, but it really wasn’t until John “Jojo” Hermann – a native New Yorker-turned-Mississippian equally snapped by the likes of Professor Longhair and Terry Adams – claimed the chair the following spring that the band felt like a true ensemble. With a new songwriter, vocalist and worthy onstage foil in Hermann in the fold, the band’s lineup was set.

Over the next two decades, Widespread Panic released nine more studio albums and sold more than three million records, building a loyal following on the road beginning in dingy dive bars across the South and eventually headlining nearly every major U.S. music festival and selling out some of the world’s most prestigious venues. No artist has more sold-out concerts at Colorado’s Red Rocks Amphitheater, and their headlining appearance at the New Orleans Jazz & Heritage Festival set the single-day attendance record. The celebration for their first live album, Light Fuse, Get Away, drew more than 100,000 fans for a free show in downtown Athens and is still considered one of the largest CD-release parties in music history.

By 2002, the band was one of America’s best and most sought-after rock acts, but rock ‘n roll fairytales inevitably take a tragic turn. Michael Houser, Panic’s founding guitarist and inscrutable core, developed pancreatic cancer. The guitarist remained rooted at stage right until a few weeks before his death, delivering a spine-tingling, tear-jerking performance for the band’s headlining spot at the inaugural Bonnaroo Arts & Music Festival. Eight weeks after leaving the road, Houser was gone, taking with him a unique musical signature that fans affectionately dubbed The Lingering Lead. An era was over.

At the behest of their late guitarist, the remaining band members returned to the road, enlisting several friends to share the stage and help heal the void left by the irreplaceable Houser. It wasn’t until the summer of 2006 – when John Bell placed a call to an old friend to see if he might be interested in joining the band – that the wheels were put in motion for a new chapter in Widespread Panic’s history to begin.

Jimmy Herring was no stranger to Widespread Panic when he got the call inviting him to join the band. A veteran of the Atlanta music scene, Jimmy first crossed paths with the band in the late ‘80s as the lead guitarist for Colonel Bruce Hampton and the Aquarium Rescue Unit.

From the first flurry of notes at his very first show with the band – the opening night of a four-show run at Radio City Music Hall that kicked off the band’s 2006 fall tour – Herring has re-energized Widespread Panic in the best way possible: by restoring a signature guitar sound to their music, returning a sense of balance to their ensemble and enabling the band to continue to incite, amaze and move people closer to joy.

Nothing gold can stay, and no band understands that lesson better than Widespread Panic, but with Herring now in his seventh year in the fold and the band fresh off an ten-month hiatus and ready to roll, there’s a palpable sense of renewed purpose and commitment and a rejuvenated enthusiasm within the band.

That vibe – the feeling that anything can and may happen – is back with Widespread Panic. And it feels good.