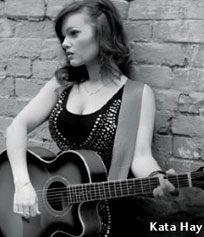 Kata Hay stepped on stage for the first time at the age of 2. She proudly belted out her rendition of Hank Williams “Hey Good Lookin'” acapella, wowed the crowd, and hasn’t slowed down since. Over the years she became the youngest person to EVER win Ed McMahon’s Star Search at age 5, took home the AWA’s Rising Star Award, became a hall of fame inductee of the Oklahoma Opry, won 5 International Yodeling Championships, and was honored with being the ONLY recipient of the Grant Leftwich Legacy Award. During her teenage years Kata traveled the US, and toured Australia twice playing a combination of her original songs, and Western Swing classics. Her cd “Cowboys, Guitars, and a Lil’ Bit Of Swing” made it in the top 5 on the Western Music Charts, and her cover of “Cattle Call” held the #1 spot for 3 weeks. At age 18, Kata made the move to Tennessee, and met Robbie Helton, who became her bass player, co-writer, and eventually 2 years later, her husband. They formed the band Kata & The Blaze in 2006 and opened for legends such as Merle Haggard, Wanda Jackson and played for over a million people in 2008 alone. Kata started a Youtube page in her spare time in late 2008. Taylor Swift hand picked Kata’s “Hey Stephen” cover as one of her 4 favorites, out of over 500 videos and posted it to the Taylor Swift website. Literally over night Kata’s youtube page exploded, and went from just a few subscribers, to over 2,000. Today Kata has over 1.8 million views on Youtube. She stays busy writing and recording new music. She also tours with the bluegrass/rock fusion band The Grassabillies, and performs nightly at the Hatfield & McCoy Dinner Fued Show in Pigeon Forge, TN.