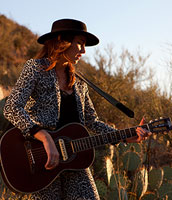 There she was, in cactus-country, Arizona, far from the adoptive London scene that provided the backdrop to four albums, 4 million sales, one Ivor Novello and one Brit Award, and further still from the Scottish folk heartland that had nurtured her. She was working with Giant Sand frontman Howe Gelb; maverick, desert punk spirit, a storied musician and producer. In Tucson’s Wavelab Studios, the pair were recording a set of songs that had bloomed into life, almost without Tunstall knowing it, and that foreshadowed two momentous events that would make summer 2012 a turning point in the 37-year-old singer/songwriter’s life.

“I’d always had this yearning to crack open my ribcage and be able to let everything out,” she reflects. She had attempted it through her personal journal writing, but had never had the confidence – the unselfconsciousness – to do it in song. “And then last year led to it all happening without even trying anymore,” says Tunstall. She’s referring to the death of her dad last August, then, the following month, her split from her musician husband. “But you know, the first half of the record was written before any of that happened, so there is a kind of weird savant quality to it.”

The result: an album of two halves, both temporally and physically. Invisible Empire//Crescent Moon straddles either end of 2012, the year KT Tunstall’s world was rocked from its axis before settling on a new emotional orientation. Each was recorded in Arizona, and both are swaddled with atmosphere, poignancy and, yes, hurt – but, also, hope. One, oddly, prefigures the losses that were to come; the other, beautifully, captures a new, reinvigorated state of being in the aftermath. Together, they combine to create the album of Kate Victoria Tunstall’s life.

At the beginning of last year, the Scottish singer, songwriter and musician had no immediate plans to make a new album. After touring the world in support of 2010’s Tiger Suit, she had intended to take things easy for a while. Circumstances, and frustrations, and desire, though, wouldn’t let her rest.

“The last record was the beginning, I think, of a bit of a rebellion. I’d spent at that point six years on a pretty full tilt ride…whilst doing what I was doing within a very pop formula. So while I wasn’t always producing typical pop music, the way I was recording it, and the way those albums were getting to people, were in a pretty standard fashion in terms of being a pop artist signed to a major label. I needed things to change.”

In the wake of the electronic-flavoured Tiger Suit, Tunstall decided to go “absolutely the other way”. In 2011 she recorded an EP, The Scarlet Tulip. Just her, at home, with a picked guitar. “So easy and so relaxed,” she beams. “It was great. And that fed into enjoying the idea of stripping back completely.”

Around the same time her old Fife musician friend King Creosote (Kenny Anderson) asked if she’d be a vocal partner as he and Jon Hopkins toured their Mercury-nominated album Diamond Mine (2011). Popping up on the occasional stage in support of an album she felt was “astounding” was another palate-cleansing experience for a singer who had been on an album-tour-album treadmill for over half a decade.

“Singing with Kenny again feels like a bit of a seminal moment for me,” she admits. Firstly she was honoured to help out on the Diamond Mine tour, having sung with Anderson on various projects for almost 20 years. And secondly, she loved travelling round the UK, experiencing these “totally silent and emotional” audiences. “Seeing people really desperate for something meaningful and something beautiful,” she elaborates. “And something executed passionately and with real craft. It was just such an antidote to a lot of stuff that’s out there at the moment.”

Then came another collaboration: Jools Holland asked her to join his big band. It was her voice he was after, not just her personality. For the first time, Tunstall began to consider herself not just as a musician but specifically as a singer.

“So this album is about singing,” she states, and readers would here be directed towards the graceful, gently orchestral triumph that is the song Crescent Moon as evidence of Tunstall’s sublime on-mic skills, “and it’s about my voice. That was what I wanted to be the centrepiece of the album, which I’d not done before.”

Then, the third in a triptych of turning-point hook-ups. Robyn Hitchcock asked Tunstall to join a touring show called The Floating Palace. It was Hitchcock, Tunstall, Martin and Eliza Carthy, Krystle Warren and Howe Gelb. “Completely opposing musicians!” she smiles, “but we all played as each other’s band, and it was great.”

She and Gelb, whom she’d never met before, hit it off, “mostly over a bottle of whiskey at the Glasgow gig, actually. And he’s just such good fun. He’s mischievous and he’s a maverick and he’s got a great bad attitude towards convention and is musically very exciting.” It was a union of distant but, as it transpired, confluent minds. “It was like aliens from different planets meeting each other for the first time.”

Gelb invited Tunstall to record in his favourite studio in Tucson, Wavelab. Last February she travelled to Arizona for a two-week session. She laid down sketches for eight songs, based on “some pretty dumb guitar patterns and incredibly simple chord progressions”.

How You Kill Me emerged that spring, a woozy, hypnotic blues. “Lifting me up to those branches, letting me look on the world…” sings Tunstall, leaning in close to the mic. “Just as I sing like a bird, you, you shoot me down for your fun…”

“It’s about basically knowing your potential – knowing you’re great – but not being able to see it through because of your own insecurities and not feeling a support system around you.”

Made Of Glass was another song from that period. As the title telegraphs, it’s a song about the fragility of life. “That was written way before my dad died,” she says of a composition about a friend who suddenly died from pancreatic cancer aged only 34. Just before he died he’d gifted her a cut-glass vase. The irony hit home afterwards. “I was like, you absolute bastard!” she laughs. “The one thing I’ve got that you’ve given me is the most breakable thing I own.”

Months later, before the loss of her dad, she would write Carried, a drifting, chamber piece that seems to bottle the desert atmospherics. It’s about being transported over the threshold of life, inspired by her fathers’ physical struggle, but soon to be unusual in it’s clairvoyant nature.

Feel It All, the album’s first single, is absolute torch-song and twang, and appears on the album in two versions; the original album version, with PJ Harvey collaborator John Parish on drumming duty and recorded at his Bristol studio and the ‘band jam’ version which was recorded live in Tucson. “It’s probably the most personal song for me on the album,” she says of a song that sits alongside Crescent Moon and rippling piano-ballad Yellow Flower as showcasing Tunstall’s best ever vocals, rich and intimate. “I started that just before dad died and I finished it just after my split. So it was absolutely birthed out of the intensity of those two things happening. It was real medicine for me, that song.

She offers listeners a tonic, too, on the closing No Better Shoulder, a surging acoustic number that builds and builds to a belting, squealing, country-psych rocker that should catalyse a cathartic outburst of emotion when Tunstall starts touring her new, split-but-united album later this spring.

“After the mood of the record I really wanted something that took you out at the end, and woke you up from this spell, if you like. Because I found that anything uptempo I was trying to fit into the tracklisting burst the bubble. And I wanted to stay within that. So No Better Shoulder is the way out at the end.”

For sure, Invisible Empire//Crescent Moon is an album coloured by melancholy. But it’s not a grief album, she insists, and nor is it a break-up album. Not one of the songs on the second half directly references her divorce. Still, it is, as she says, an album in which she self-administers open-heart surgery. “Invisible Empire is probably the most relevant in terms of what was going to happen,” she says of the album opener, a song that wheezes into life before settling into an unsettling jaunty rhythm. “In that song I think there was a subconscious realisation that things weren’t as they should be – my subconscious was ahead of me, and I was catching up.”

The song, she admits with a laugh, could be her in a nutshell: a cloud on the horizon but a skip in her step.

“A big thing about the album for me,” concludes KT Tunstall, who – prior to a summer run of festival band shows – will be touring solo, unaccompanied, “is that I don’t care if it’s sad. I want it to be an emotional experience. But I don’t actually think it is a sad album. Melancholic is probably quite a good description of it. But it really is me now coming from a place where I don’t feel the need to please anybody but myself. I always liked to think that’s where I was before – but I don’t think I was.”