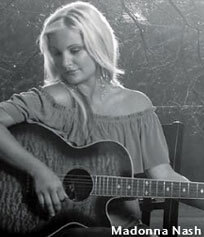 Madonna Nash writes all of her own songs, and though she released her 13-song debut album independently on her own label, she has already achieved national video play on CMT, CMT PURE and TCN. Her single “Dirty Little Secret” is a MusicRow Magazine Top 40 country radio hit as well as a DJ TIMES Magazine Top 20 Dance Club Hit. She was the winner of the Female Country Artist of the Year at the 2010 Carolina Music Awards and was nominated for Best Country Album at the 2012 Independent Music Awards.

Madonna Nash’s great, great uncle was Connie B. Gay, the founding president of the Country Music Association, and her self-titled debut album was recorded in Nashville using a Grammy winning team of studio engineers and musicians who have worked with such stars as Taylor Swift, Tim McGraw, and Reba McEntire. Her album, which was co-written and produced by her husband, received 6 out of 7 stars in the Nashville Music Guide, and it is currently available on iTunes and Amazon.com.

And yes, Madonna is her real name.