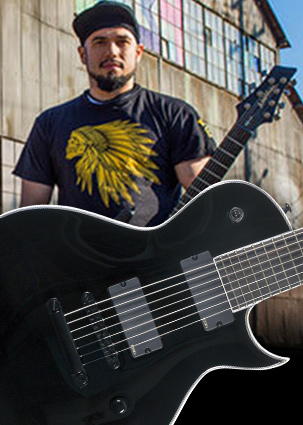 At 27, Marc Rizzo was already a household name among metal fans before finishing “Colossal Myopia”, his first solo record. A shredder’s shredder, Marc was a founding member of the immensely successful metal act “Ill Nino” with whom he recorded and toured. After leaving Ill Nino, he joined Soulfly in 2003 and played guitar on their fourth record “Prophecy” and every release since then. Rizzo also recorded and toured with Cavalera Conspiracy (a reunion of Sepultura’s Max & Igor Cavalera) and launched his own Death Metal project, INPSYCHOBLEEDIA. Marc Rizzo is one of the new breed of young guitarists in contemporary bands who has stepped out recently with solo projects that reveal a phenomenal command of the guitar. His latest solo record, “LEGIONNAIRE” reveals Rizzo to be a master musician with deep musical roots in metal, classical and flamenco guitar and is a much needed breath of fresh air to the instrumental rock genre.

Guitar sales have been up and young musicians have been looking for younger, contemporary players to learn from. Marc Rizzo proves again on his solo records why he stands out from the rest, with an arsenal of staggering guitar chops that are bound to start a large groundswell in the guitar community, as guitar records of this skill and intensity are in short supply.

Marc has built quite a substantial following through his years of touring and recording with Soulfly, Cavalera Conspiracy and INPSYCHOBLEEDIA. The Shrapnel Label group has long been an indy leader and is known for recording superior musicians and their phenomenal guitar records featuring guitarists such as Yngwie Malmsteen, Tony MacAlpine, Marty Friedman, Vinnie Moore, Jake E Lee, Michael Schenker etc. Marc Rizzo is paving the way for a new generation of guitar oriented recordings.