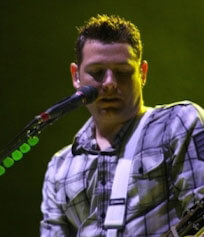 A multi-Platinum music producer, songwriter, mixer, engineer, multi-Instrumentalist and programmer, Mike Krompass has produced, engineered, mixed, written and played on many top charting Billboard hits, selling in excess of millions of units worldwide. A transplant from Toronto Canada to L.A., Mike now resides in Nashville TN, working out of his studio “The Playground Studio” where he and his wife own their new record label “Twelve Records”.

Mike; previously a writer with Kara Diaguardi’s /BMG’s Arthouse Ent. and now with Razor and Tie, has delivered singles across a wide range of diverse artists; from hot 100 urban club smash “WOP” (J Dash) to Billboard top 20 single “MAGIC” with Smash Mouth. “WOP” became the fastest growing dance song in the United States charting on the Mediabase charts, Billboard singles charts (spending 17 weeks on the Hip-Hop/R&B Hot 100) and became the #1 record on TuneCore.

Mike’s career as a fluent guitar player, bassist, drummer and keyboard player helps him to create a balance between hands-on help and drawing out an artist’s distinct sound regardless of genre. Producing and writing everything from Rock, Country, Urban or Pop gives Mike the commercial edge needed on today’s music demands. He can pick up an acoustic guitar and write an organic pop song or throw down beats as a programmer on a hip-hop track. He never wants to limit himself to just one style or sound. Mike’s Productions have that BIG sound in whatever style it may be.

Mike also has a knack for developing unsigned bands and helping them create their sound.

Mike began his career in Toronto Canada as a top studio/ live session guitar Player and music Director. As a guitar player, Mike has toured with Nelly Furtado, Edwin and has shared stage with the likes of Elton John, U2, Destiny’s Child, Cheap Trick, Boys to Men, Bruno Mars and many others.