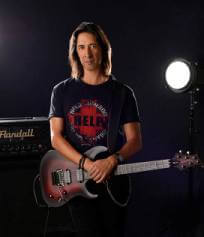 Mundo Juillerat, comes from the island of Oahu, Hawaii. He grew up surrounded by polynesian music because his Mother, Aunty, and cousins were dancers in Hula (Halaus) and Tahitian dance troupes. Starting off on the Ukulele, he graduated to playing guitar and the Toeti’ (tahitian log drum) in various Hawaiian shows at the age of thirteen.

Moving to the States, Mundo continued to work professionally. In 1987 Mundo graduated from the Guitar Institute of Technology obtaining a vocational diploma with honors. While at GIT he studied with Jennifer Batten, Scott Henderson, Joe Diorio, Paul Gilbert and Frank Gambale.  Mundo has also studied Flamenco guitar with Phillip Amundson at the University of Nevada Reno. In keeping up with his professional musicianship he’s continued his studied from Bruce Conte of Tower of Power, jazz master Joe Lano, and gypsy jazz artist Andreas Oberg.

In recent years he’s worked in some of Las Vegas’ biggest production shows like Storm, Mamma Mia, and Le Reve, where he now currently performs.

Mundo has and continues to work in the music industry. As a sought out guitar instructor he’s taught beginners to touring pros, and has done clinics in the United States as well as in Japan. He’s also done three instructional guitar videos and has authored one instructional book.

As an artist for Washburn Guitars ( U.S. Music Corp.) he’s worked as a clinician at NAMM and other trade shows. His clinician work has led to direct involvement with product development for Washburn and U.S. Music Corp’s Consumer products. This involves beta- testing, reviewing products, visualizing new products, writing manuals and representing U.S. Music Corp in product meetings with other companies such as Disney and Artec. Mundo has also been on a product development team for a musical video game for Ediface Digital and Sony.

Throughout his career Mundo has done countless session and recording work. Recently most of his guitar session work including three cd projects is done in his studio Ka Hale Ilio. He’s produced a few artists mainly in demo form, and is most proud of his role of Producer of The Hot Club of Las Vegas’ cds and the Amazing Wannabees debut cd.

With the Hot Club of Las Vegas starting off as a passion project, it has now formed into a viable music product. As a career sideman making his living as a funk and hard rock “shredder,” Mundo has changed course by expanding his “art” with learning new picking techniques, new harmonic concepts and re-inventing himself as a gypsy jazz artist. As the leader of this band, (now with two cds) Mundo Juillerat is very excited about the possibilities of this new musical adventure.

New for 2014 is a rock trio called the Amazing Wannabees! Rounding out the band is Pepe Jimenez (Santana) on drums, and Danny Miranda (Queen,Blue Oyster Cult, Meat Loaf) on bass.  Look for their debut cd this year!