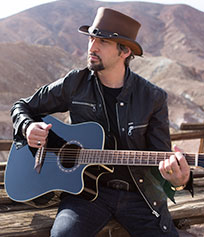 With a 20-year career in Christian Contemporary Music, singer and composer PG is set on spreading the Gospel using rock ‘n roll. He is the former lead singer of Oficina G3, the most successful Christian rock band in the history of Brazil, and sang with them for 8 years in many regions of the globe – including a performance in Rock In Rio 3 Festival – before going solo eleven years ago.

PG has recorded 6 CDs and 2 DVDs, and was awarded 10 Gold Records and 4 Platinum Records in the last two decades. He has been recognized multiple times as the best rock singer/male Christian singer in Brazil. The singer’s shows are intense and vibrant, but beyond performance and entertainment, he wants to share hope and encouragement with anyone opened to his songs.

Recently, PG joined Som Livre Records’ cast, and is scheduled to release a brand new album next July, entitled “SETE” (“seven”, in English). As part of the project, he has also released a new video, SETE’s first single: “Ser Alguém”.