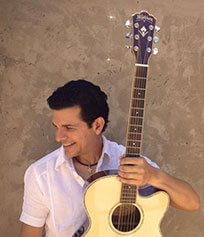 RHIGO is a Cuban / Venezuelan singer-songwriter. (Havana Cuba, January 8, 1977) He began his career at the age of 7. As a child  migrated to Venezuela (June 2, 1984) His music is defined as pop, with elements of rock, EDM, fusión, folk and acoustic, among many others.

Quality, versatility and interpretation, give him the nickname “The voice” as he is known among by his followers and his live performances demostrate just that. The modern troubadour style accompanied by his guitar is one of his most outstanding characteristics.

Rhigo, is closely related to the world of advertising and media as host and voice of many products.

He is a Washburn guitars artist and member of Ascap.