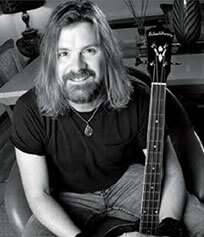 Robert Kearns is an American bassist who has played with several notable bands. He is from Conover, NC.

He was a founding member of Cry of Love from 1989 until 1997 and went on to join The Bottle Rockets from 1998 until 2005. In 2009 he was named as the touring substitute bassist for a cancer stricken Ean Evans in Lynyrd Skynyrd. Evans subsequently died and was permanently replaced by Kearns.

Kearns has since joined Sheryl Crow’s band as bass player and backup singer.