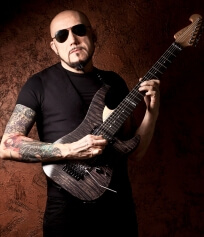 Grzegorz “Skawa”SkawiÅ„ski was born on the 6th of July 1954 in MÅ‚awa. He performed in various non-professional bands and, for a short period of time, attended secondary Music School in GdaÅ„sk. During his studies at the University of Gdansk he was a member of a band named HOROSKOP. However, it was a membership in a band KOMBI that brought him real popularity. Initially the band played rock music and the guitar sound was the base of many of their songs. Along with the third album the sound of keyboard became most important and Grzegorz was perceived more as a singer than a guitarist. As the bands front man, Skawinski performed with KOMBI thousands of concerts in Poland, the USA and many other countries.

The turning point of Grzegorz’s career was his visit to the United States during which he had a chance to meet the world’s top guitar players.

– I was warming up along with Paul Gilbert, Vinnie Moore and Steve Vai – recalls Grzegorz.

– I went crazy back then! I told myself that not only did I want to, but also that I had to play like those guys!

SkawiÅ„ski immediately started thinking about leaving KOMBI and setting up his own band, which would perform his favourite kind of music – heavy guitar rock.

Since 1989, after his first solo album was released, SkawiÅ„ski began his solo career in a group called SKAWALKER. Along with great musicians: Waldek Tkaczyk and Zbigniew Kraszewski they created an album entitled ‘Skawalker’, which met with limited success. Another album released by SKAWALKER was ‘Sivan’ and made critics appreciate the band’s leader’s outstanding talent. In 1993 SkawiÅ„ski became Top Rock Guitarist according to ‘Gitara i Bas’ magazine, and the Third Best Metal and Acoustic Guitar Player. A year later he overpowered his rivals and became number one in three categories: Guitarist of the Year, Rock Guitarist and Acoustic Guitarist. At the same time ‘Sivan’ reached the top as the Best Rock Album. Nevertheless, in spite of critic’s appreciation, it did not become a best-selling record. Afterwards, SKAWALKER was preparing to launch a new album. The idea was to find a new singer in order to take the burden off Grzegorz’s shoulders. The choice was a young vocally talented girl spotted by the band’s drummer during one of the concerts. Shortly after, the group changed its name to O.N.A.

Grzegorz faced a completely new situation. Over the years he had got used to the front man’s role. —  The new singer made us feel 20 years younger! – says Grzegorz today. The band immediately reached the top of the charts and gained popularity. Their first record brought Skawinski even more success. One year later O.N.A were nominated by Gitarowy Top – ‘Gitara i Bas’ magazine’s readers’ chart – in seven categories and their ‘Bzzzzz’ became the Best Guitar Album of the year. In March of 2003 the band’s last album was released, followed by their last concert in a Warsaw’s club STODOÅA.

Afterwards, SkawiÅ„ski and Tkaczyk decided to continue their cooperation under a new name – KOMBII – resembling their first successful project. They invited the first drummer of KOMBI – Jan Pluta. KOMBII signed a long-term contract with UNIVERSAL in the spring of 2004 and recorded their first album – ‘C.D.’, which gained the Platinium Record title twice. In 2007 the band released another album ‘Åšlad’, which also became platinium.Their newest record – ‘O miÅ‚oÅ›ci’ has already achieved gold status.

By the end of 2010 Grzegorz started recording his second solo album. Released in March of 2012, ‘Me and my guitar’, turns out to be a real success in many ways. Not only does it contain exceptional guitar compositions but it also shows Skawa’s great capability of producing outstanding guitar sounds and shows his great condition as a guitarist. The album has already been greatly acclaimed by critics and listeners. It reached Top Ten Best Selling Albums in the first week after the release.