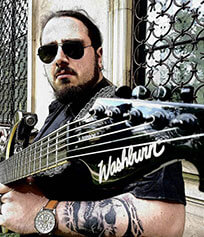 Tomasz “Destro” Radzikowski,  lead guitarist and Vocalist of (Spirits Way,One Shot Eye), was born on the 5th of February 1993 in Warsaw, Poland. Early on he was a fan of guitar music and fascinated by the art of the instrument. He was a big fan of Instrumental rock musicians like Joe Satriani, Yngwie Malmsteen, Jeff Beck, Jason Becker. That inspired him to pick up the guitar. He started playing on classical guitar, but the real passion was with his first electric guitar.

His main influences are Joe Satriani, Yngwie Malmsteen, Zakk Wylde, Dimebag Darrell, Jeff Beck, Dave Suzuki (ex Vital Remains,Churhburn), Nuno Bettencourt. His Band, Spirits Way, is from Warsaw and formed in 2009 by lead guitarist/vocalist and group leader – Tomasz “Destro” Radzikowski, officially working since 2010. Bands music can be called a classic death metal inspirited by bands such as Morbid Angel, Deicide, Death, Carcass or Cannibal Corpse. Lyrics are telling about death, violence and perversion. Describing their music we can call it both technical and with suitable climate for this genre of music. So far band has published three albums – “Freedom Through Blood” (2011) and “Brainless Puppets Are Enslaved” (2012). “Devoid of Morality” (2016).