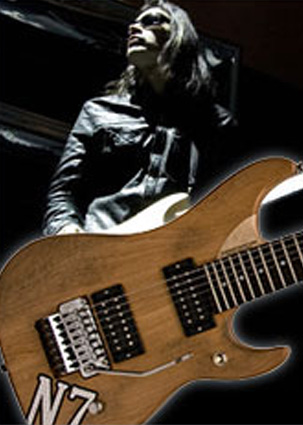 “I played Washburn initially because I got to design the EXACT guitar that I wanted. 25 years and it’s still my perfect performance guitar- and the tone- THAT has become a part of my DNA. It’s STILL my go to guitar no question.”

Guitar virtuoso, singer-songwriter, and record producer, Nuno Bettencourt rose to international prominence as guitar player with the multi-platinum rock band EXTREME. To date, the Grammy-nominated band is one of the most successful rock acts of the early to mid 1990s selling over 8 million records worldwide. Nuno penned the acoustic ballad “More Than Words” that went to #1 on the Billboard Hot 100 charts and “Hole Hearted” that reached #4 on the same chart.

Outside of EXTREME, Nuno is also a member of the guitar supergroup GENERATION AXE which features Nuno, Steve Vai, Yngwie Malmasteem, Zakk Wylde and Tosin Abasi.

Nuno has written, produced and performed with many artists. He was personally recruited by Rihanna to be her guitar player and touring music director on 4 mega-world tours. Nuno performed with Aerosmith front man Steven Tyler at the 21st Nobel Peace Prize Concert in Oslo, Norway, honoring children’s rights activists Kailash Satyarthi and Malala Yousafzai. Nuno has also preformed with Paul McCartney, Kanye West, Janet Jackson, Perry Farrell and many others.

In order to develop the N Series with Washburn, Bettencourt utilized his extensive knowledge of the guitar and designed each model with an extremely fast neck that allows for easy access to higher frets via the Stephen’s® Extended Cutaway. A Duncan® ’59 & a Lawrence® L-500 in the bridge make this reverse headstock marvel wail. These super road axes are the gateway to total creativity, just ask Nuno and the thousands of musicians that play them.